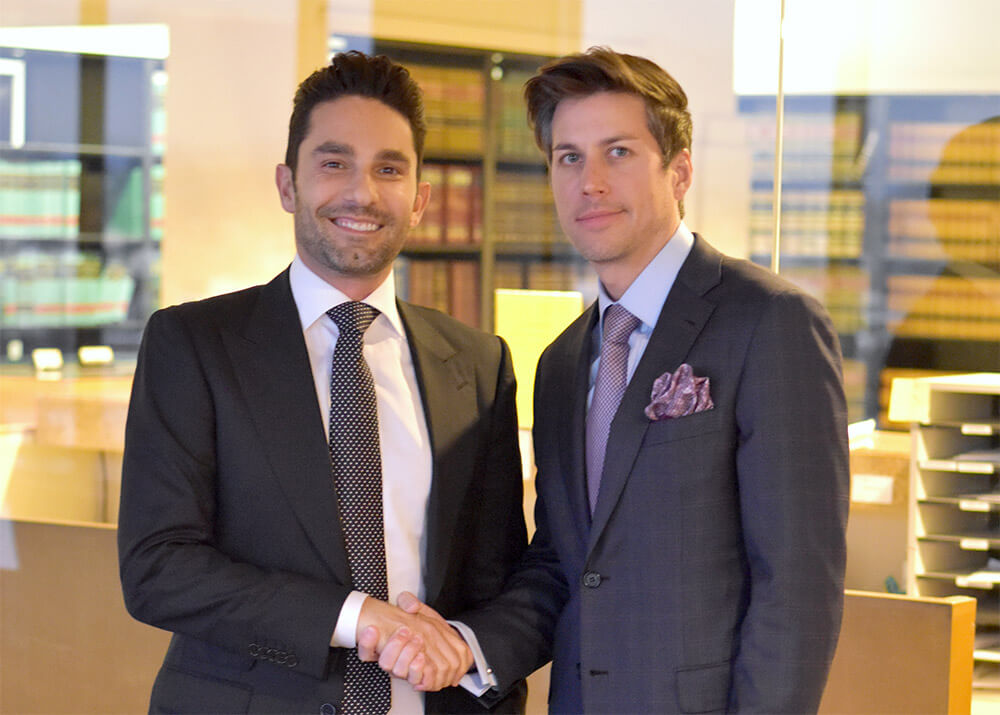 LOS ANGELES, Dec. 15, 2017 — On Saturday, December 9, 2017, Founding President and Managing Attorney, Bobby Saadian, announced that Senior Trial Attorney, Colin Jones, is Wilshire Law Firm’s first partner. Saadian shared the news during the company’s annual holiday party. The event hosted more than 200 guests. Among them, the LATLC’s incoming President, Dena Weiss, Super Lawyer, Thomas V. Girardi, of Girardi | Keese, and other distinguished members of the legal community, including the firm’s attorneys, employees, and their families. Saadian, a first-generation lawyer, founded Wilshire Law Firm, over a decade ago. Today, the firm employs more than 70 professionals and has recovered more than $170 million, in settlements and verdicts, on behalf of its clients. Saadian’s vision for sustainable growth, his focus on delivering outstanding service, and his efforts to acquire top talent contributed to this opportunity. In a recent interview about the partnership, Saadian and Jones recalled their first meeting at the firm’s head office in Los Angeles, almost five years ago. Saadian defined what it takes to become a partner at the Wilshire Law Firm, and how Colin has been a true professional, a lawyer dedicated to his clients, with consistent results. Colin Jones is triple-barred in the states of California, Illinois and Texas. He has been a Super Lawyers Rising Star since 2015, a National Trial Lawyers: Top 40 Under 40, and a Top 100 Lawyer. He has received these accolades, every year, since 2011. So far, Colin has recovered more than $65 million for his clients. Colin’s heartfelt acceptance speech during the official announcement included anecdotes of his humble beginnings as a law student, and his genuine appreciation for every member of the Wilshire Law Firm team, who contributes to the firm’s success. He also thanked his dear friends and family for encouraging him throughout his career. Wilshire Law Firm celebrated its 10th anniversary in July. This partnership marks a new era for the firm’s leadership. It opens the doors for more top-notch talent to be part of Saadian’s legacy, and explore the opportunities the firm has to offer. For over ten years, Wilshire Law Firm has earned prestigious awards and accolades, from industry peers and consumers. The firm’s attorneys are among the top 1% of lawyers, nationwide, and are regularly featured in local and national media outlets; for their expertise and legal know-how, representing clients in high-profile cases. Wilshire Law Firm represents victims in class action lawsuits and mass torts cases, against negligent corporations and big business; victims of catastrophic accidents, environmental contamination, dangerous pharmaceuticals and defective products. Wilshire Law Firm also fights for employee rights and equality in the workplace. 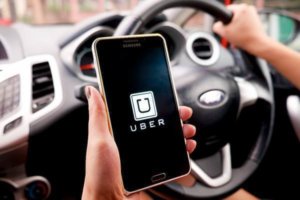 LOS ANGELES, Nov. 24, 2017 /PRNewswire/ — On Tuesday, November 21, 2017, Bobby Saadian and Colin Jones of Wilshire Law Firm filed a proposed class action lawsuit in federal court, on behalf of their client, Flores, against Uber Technologies, Inc. and its subsidiaries Rasier, LLC and Rasier-CA, LLC. The complaint alleges that Uber violated California constitutional laws, unfair competition laws; that Uber engaged in fraudulent, deceptive business practices, constitutional invasion of privacy, and other violations. Uber acted negligently, when it failed to protect personal and financial data, from drivers and passengers, resulting in a data breach, which started back in October 2016. Reportedly, the information stolen by hackers ended up on the black market, while Uber kept quiet about the facts. Therefore, putting the app users at a greater risk of identity theft, fraud, and all the long-term negative consequences associated with being the victim of a data breach. The proposed class action has been filed to put an end to Uber’s misconduct, and to obtain fair compensation for those, whose privacy rights have been violated, as a result of Uber’s negligence. Uber had a duty to protect personal and financial information from drivers and passengers. As well, a responsibility to implement security protocols to prevent hackers from stealing this information. Wilshire Law Firm has received several complaints against Uber regarding this data breach. Wilshire Law Firm was founded in 2007 by Bobby Saadian, Esq. The firm represents victims in class action lawsuits and mass torts cases against negligent corporations and big business; as well, victims of catastrophic accidents, environmental contamination, dangerous pharmaceuticals and defective products. Wilshire Law Firm also fights for employee rights and equality in the workplace. &#x3C;/> Case Filing Number: 2:17-cv-8503 / PDF copy of the class action available upon request. 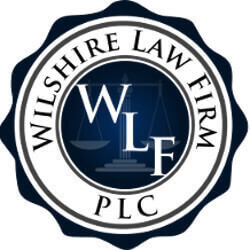 LOS ANGELES, June 21, 2017 /PRNewswire/ — On Friday, June 9, 2017, Bobby Saadian, Colin Jones and Daniel Miller of Wilshire Law Firm filed a proposed class action lawsuit in a federal district court in California, on behalf of their client, Scott Ables, and similarly situated individuals, against Brooks Brothers Group, Inc. The complaint alleges that Brooks Brothers violated California constitutional laws and California unfair competition laws; breached implied contracts, and acted negligently, when the company failed to safeguard and protect its customers’ information from threat of being lost, stolen, misused, and/or disclosed to unauthorized parties. The 11-month data breach compromised payment data from customers, who shopped at Brooks Brothers and Brooks Brothers Outlet retail locations, across the United States and Puerto Rico, between April 4, 2016 and March 1, 2017. A non-authorized party gained access to private, financial information from Brooks Brothers’ customers, after installing a malicious software designed to capture payment card information including: full name, card and account number, card expiration date, and card verification code, according to a forensic investigation. The proposed class action has been filed to seek justice for those affected, as a result of the retailer’s negligence. Brooks Brothers had a duty to design, maintain and test the company’s internal security system to make sure that customer information was, adequately, safe and protected; by implementing timely processes, which could promptly detect a data breach. Wilshire Law Firm has received several claims from clients across the United States, whose payment information has been compromised, after Brooks Brothers failed to protect their data. Those who have been affected are registering their claim on the Wilshire Law Firm RetailDataBreach.com website. Wilshire Law Firm was founded in 2007 by Bobby Saadian, Esq. The firm represents victims in class action lawsuits and mass torts cases against negligent corporations and big business; as well, victims of catastrophic accidents, environmental contamination, dangerous pharmaceuticals and defective products. Wilshire Law Firm, also, fights for employee rights and equality in the workplace. &#x3C;/> Filing Number: 2:17-CU-04309 / PDF copy of the class action available upon request.

LOS ANGELES – CA. On Monday, April 3, 2017, Bobby Saadian and Daniel Miller of Wilshire Law Firm filed a proposed class action suit in federal court on behalf of their client, Sophano Van, against Uber Technologies, Inc. and its subsidiaries Rasier, LLC and Rasier-CA, LLC. The complaint alleges that Uber, intentionally, manipulates the route data reported to customers and drivers by using one route in determining its upfront pricing and then transmitting different navigation instructions to drivers. This creates a discrepancy in the price that Uber is charging customers and the amount that Uber is reporting to drivers; allowing Uber to pocket extra money, in addition to the booking fees and percentages permitted under its agreement with drivers. Uber started utilizing upfront pricing in various cities across the United States in mid-2016 and switched over to the current upfront pricing model in California around September 2016. Uber’s upfront pricing requires customers to select their pickup location and destination, in advance, and then charges them a fixed price for the transportation. However, when an Uber driver arrives to pick up the customer, Uber provides the driver with a different route that results in less compensation to the driver. When the trip is completed, Uber sends the driver a breakdown of the total fare, Uber’s fees, and the payout to the driver. However, the total fare reported to the driver is not the total fare collected by Uber from the customers. The proposed class action has been filed to put an end to this misconduct by Uber and to obtain fair compensation for the drivers, who have been underpaid by Uber’s misleading fare reporting. Wilshire Law Firm was founded in 2007 by Bobby Saadian, Esq. The firm exclusively represents victims of catastrophic accidents, environmental contamination, dangerous pharmaceuticals and defective products. Wilshire Law Firm, also, represents individuals and families in their battles against insurance companies and big business.