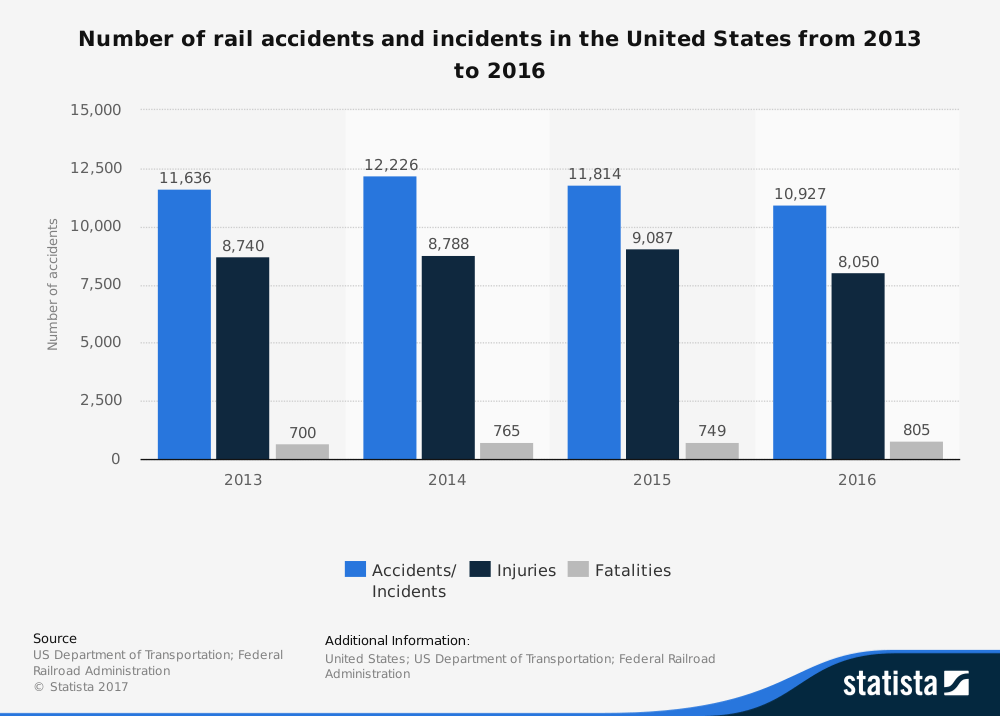 Are Our Trains Safe?

Driving a car in Los Angeles is time-consuming, stressful and, at times, dangerous. That’s why many people opt to take the train. For many commuters, the train is the only way they can travel to their workplace reliably. But, is travelling by train safe? Though train fatalities are not as common as they once were, they can still happen at any time. Take, for example, the Amtrak derailment in Washington State or the pedestrian death that occurred in January. These are only a few incidents that come to mind, but there have been thousands of train accidents reported in the United States year after year. In fact, The Federal Railroad Administration documented over 10,000 train accidents in 2016 alone. As you can see, train accidents are not something of the past, but are occurring every day, taking the lives of hundreds and injuring thousands. In a car, instinct will make you slam on the breaks, swerve out of the way of oncoming traffic, stop for pedestrians, etc. When you’re a passenger on a train, you have zero control over what happens. The only thing you can do is be prepared in case of an accident. When boarding a train, keep the following tips from Vocativ in mind to help you survive a train accident: Do not sit in the front car. The safest cars to ride in tend to be one or two from the back. Sit facing backwards so you’re not flung out of your seat in case the train suddenly stops. If there is a café, do not linger in it too long. Avoid sitting near windows. Follow the captain’s and crew’s orders. Escape using a window or emergency exit. Taking precaution is never a wasted effort. You should use the above tips whenever you’re traveling by train to hopefully mitigate any injuries you may suffer from in the event of a train accident. Unlike train passengers, pedestrians and drivers do have full control over what actions they can take when they’re around trains. Still, according to Operation Lifesaver, a person or vehicle is struck by a train, every three hours! Operation Lifesaver recommends the following safety measures when driving or walking near train tracks: Only cross train tracks at designated public crossings that include a crossbuck, flashing red lights or a gate. Never walk around or under a gate when flashing. Don’t expect a train to stop in time before hitting you. They can take up to a mile or more for it to come to a full stop. Don’t walk on or near the train tracks! Trains have an overhang of at least three feet in both directions. Wait a minute before crossing train tracks after a train passes. It’s possible that a second train is following close behind them. Do not attempt to hop onto a moving train. Never rely on a train schedule. Next time you’re thinking about walking or driving on train tracks, remember that you could be one of the eight pedestrians and drivers that are struck every day! Our train accident attorneys understand that for many people, traveling by train is absolutely necessary. We implore that you take precaution when you do! If you or someone you know has been injured in a train accident, contact a Wilshire Law Firm attorney to discuss your case for free.